Our putters are designed to set-up with the presence of a golf ball.

Our patented Axis Control technology allows you to see where your hands are aimed.

Our patented Axis Path Technology aids in the proper fitting of your putter.

Our Philosophy on Putter Design

The act and art of putting requires two key elements: directional control and distance control. Only GAIM Golf truly addresses both of these elements.

We believe that those with the best visual systems tend to win. If you are not aimed correctly, all other forms of technology have little value.

Our patented Axis/Path Technology & Axis Control Technology alignment systems have visual cues which allow you to see & feel all of these movements.

The weight distribution and the material of the head have the biggest impact on how consistently true a golf ball rolls.

From optimal weight distribution to the unique putter-head material of one solid composite, our putters are designed to give you maximum feel and control, even on off-center hits.

The entire body of our GAIM putters is comprised of a solid composite. The A-365 is 365 grams, and the G-360 is 360 grams. Because of our solid composite, the energy transfer is pure, which maintains consistent distance control.

Many putter faces contain a composite made with dissimilar materials. However, different materials can produce varying distance results. The stroke motion of a putt can, therefore, result in contacting either the centered insert, the lower-perimeter material, or a combination of Each. There is also a concern as to how varying temperatures affect the hardness and softness of dissimilar materials.

With distance control being the reason for well over 90% of 3-putts, GAIM puts a premium on a consistently reliable and solid material that produces pure energy transfer with every putt.

The center line, separated by the hole, on the alignment system on top of our putter is the Axis portion of our Axis/Path Alignment System. The two lines of exact length offer a location for each eye which helps the eyes to naturally square to your target line (two eyes/two lines). The axis marks also make certain that the putter-face is squared to the intended target, particularly for those who use a lined ball.

The two lines that are the exact width of a golf ball on top of our putter are the Path portion of our Axis/Path Alignment System. These lines help relieve tension by eliminating the psychological need to putt on a perfectly straight line.

Both our G-360 and A-365 putters are high moment of inertia (M.O.I.) putters. Moment of Inertia is just a fancy phrase for heel/toe weighting and is a way of gauging a putter’s stability & forgiveness on off-centered hits.

Placing more mass in the heel and toe portions of our putters raises M.O.I., and by raising the M.O.I., you get a larger “sweet spot”. Notice that there is a large void in the center of our putters that produces a natural heel/toe weight system.

By removing the unnecessary material, over 87% of the total mass has been reallocated into the heel and toe portions of our putters. 87% is an extremely high percentage of heel/toe weighting. M.O.I is maximized in our putters, which is often the difference between a near miss and a made putt.

Iron manufacturers attempt to place mass as low as possible for “low COG”, to generate higher ball flight and backspin. I believe the same physics applies to putters, except that it should be reversed. This is based on the fact that a putted ball, which remains in constant contact with ground surface, needs to quickly achieve a fully forward, or “true roll”, by overcoming the effects of rearward rotation created by loft at impact.

The cross section of both Gaim putters shows that 75% of the strike zone’s mass is located in the upper half of the head. The A-365’s high COG combined with a 3.75° loft has been robot tested and proven to beat putters with high “true roll” performance.

Have you ever wondered why some players, even pros, place their putter-head in front of their ball when aiming the putt? They do this in an attempt to overcome a problem that has been described as “visual noise.” It occurs when a golf ball and putter-head have nothing visually in common. Placing the putter in front of the ball makes it easier to aim the putter without the presence of a ball.

GAIM has overcome this simple aesthetic issue. Our path marks help relieve the tension by eliminating the psychological need to putt on a perfectly straight line. The axis marks make certain that the putter-face is squared to the intended target, particularly for those who use a black-lined ball.

Our G-360 is matte black, and with the Axis/Path alignment, it visually unites the club with the presence of a ball.

Our new design, the A-365, is white like a golf ball, and the alignment system is black to match a black-lined ball. This new combination virtually eliminates all visual noise!

The A-365 has visual cues designed to allow your eyes to see where your hands are aimed. Notice that the entire outside perimeter of the A-365 is machined to a 15 degree angle. This is our patented Axis Control Technology.

The angle on top of our A-365 reveals a thin black edge which varies to the eye in width depending on your hand position. This allows you to be certain that your hands are in a correct and consistent position every time you putt. No other putter in the world accounts for 3D axis control.

Our patented ball retrieval system is designed with an audible click when the equator of the ball passes through the opposing pressure points. It holds the ball in position until you use your thumb to remove the ball by pressing it down.

This system was first created and patented in 2005 and was truly the 1st of its kind. The key to picking up the ball is not to simply wedge the ball into the head, but to releasably receive it.

The GAIM is an excellent putter engineered for superior performance and added convenience. The feel of a GAIM putter lends to strokes that are consistent and true. It provides you with optimum distance control and accuracy on every putt.

Here’s what you are NOT paying for:

Our Philosophy on Putter Design
The act and art of putting requires two key elements: Directional Control and Distance Control. Only GAIM Golf truly addresses both of these elements. 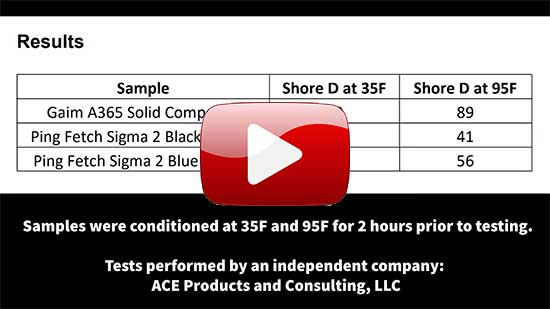